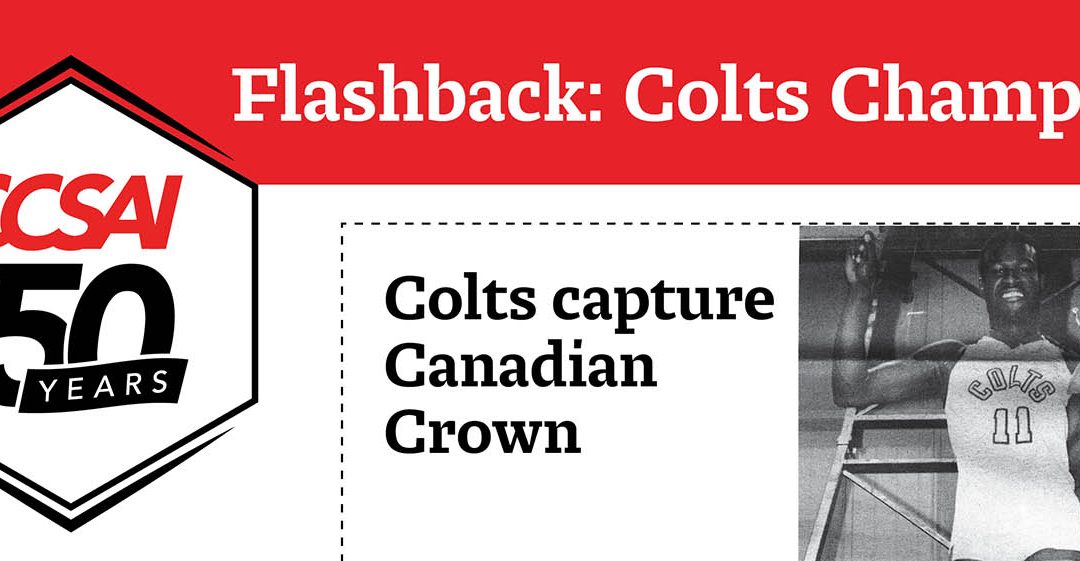 A first for Centennial

“We have not peaked yet,” said basketball coach Bob Selkirk two days before his Colts journeyed to Montreal for the Canadian championships.

And obviously, Selkirk is a man of his word.

“I think we just brought her together when we needed her,” said Selkirk two days after the Colts’ 57-54 triumph over highly-touted Southern Alberta Institute of Technology (SAIT). “I don’t think we played as well as a team all season.”

“This is something special that I’m never going to forget,” said Colts’ centre Breton Lowe, who was named as the tournament’s MVP.

“Brenton had an outstanding tournament,” Selkirk told reporters in Montreal after the victory. “In each of the games he played, he took 16 or 17 boards and he was clutch from the foul line for us when it counted.”

But as far as Lowe is concerned, it was a team effort that won the championship.

“The team is like a mold, everybody has their little part to do to make it work. And everybody did their part,” he said.

But according to Selkirk, Lowe “was always, as far as I’m concerned, the heart and soul of the team.”

Going into the championship, the Colts were rated as underdogs against top-ranked SAIT. But a tight first-half dispelled any rumours of an uneven match-up as the Colts were up to 29-28 at the half.

The teams exchanged the lead several times in the second half before SAIT opened up a short-lived six-point lead with 10 minutes left. Five minutes later, Centennial took a three-point lead for good.

However, things were considerably tighter in the Colts’ semi-final against Vancouver’s Capilano as they were hard-pressed to come up with a 7-66 victory (sic).

“It wasn’t a case of us not playing that well, but Capilano were so tall,” said Selkirk. “They didn’t do anything too fancy, but we couldn’t stop what they did do.”

“That little ‘eye-of-tiger’ we lacked in the second game, we made up for in the final,” said Morgan.

The Colts got off on the right foot in their first game against Chaplain from Que. As they coasted to an 81-63 victory.

“It’s a big difference from last year,” said Lowe. This year, “we played more as a team.”

“Last year, when we won the Ontario’s, they said it was a fluke. I think this year we really showed them,” Lowe said.

As far as Lowe is concerned, the team’s tough final against Humber prepared the team for the Canadian finals. 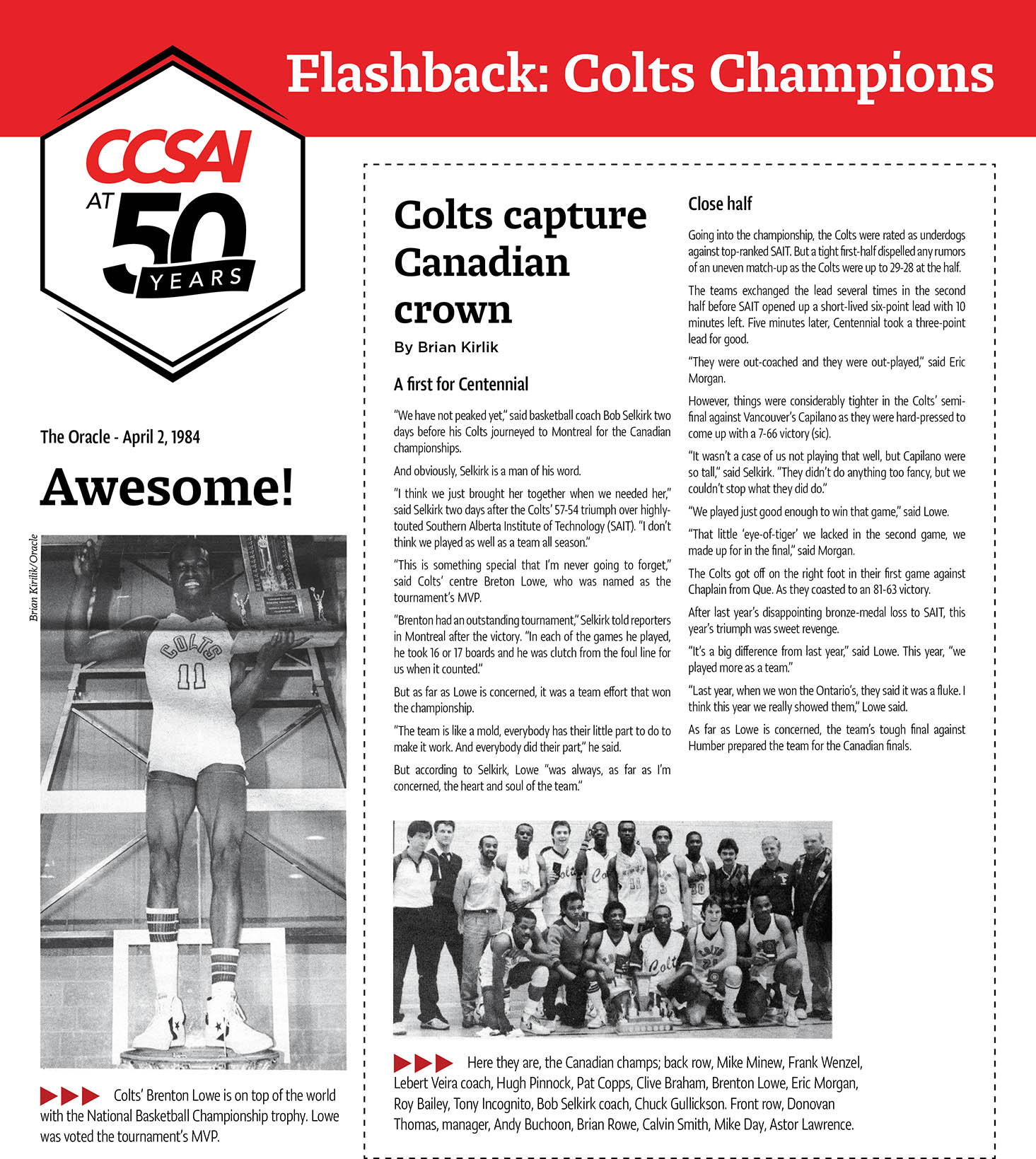 Colts’ Brenton Lowe is on top of the world with the National Basketball Championship trophy. Lowe was voted the tournament’s MVP.

Prior to their trip to Montreal, the Colts defended their OCAA basketball crown over the March break by edging Humber 75-74 in the final game of the best-of-three series.

“This is just the greatest feeling in the world,” said the Colts’ Pat Copps after the victory. “This experience was something else.”

After dropping the first game to Humber, the Colts rebounded on home court to sweep the remaining two games to earn their second consecutive OCAA championship.

In the decisive third game on March 13, the Colts eked out the thrilling one-point victory by using a variety of defenses to confuse the potent Humber offense.

“The whole strategy of the game was the changing of the defenses,” said coach Bob Selkirk, who used all 11 players on the bench.

“We just hot our big man (Lowe) to try to take control of their big man and see if our little smurfs can do the job up front,” said guard Eric Morgan. “And it worked pretty well.”

The Colts trailed throughout the first half and at one point, found themselves down by seven. But before the half closed, Centennial came to within one point, 46-45.

Two minutes into the second half, Morgan gave the Colts the lead for the first time, 49-48, with two of his game-high 26 points.

The Colts’ prolific shooter struck again for three straight baskets halfway through the second half giving the Colts a five-point lead, their biggest of the game.

But Humber fought back with their outside shooting to tie the score at 69. And after exchanging leads, Centennial was up 75-74 with 10 seconds left.

Humber had the last change at the hoop, but the Colts’ Brenton Lowe blocked a last second shot to set off a wild celebration.

Two nights earlier, the Colds bounced back from their first game loss to the Hawks in an exciting 66-64 win.

Unlike the first game, “we were in control of this game,” said Selkirk after the win.

In the first half, the Colts took charge offensively and defensively and went to the locker room with what seemed a comfortable 37-23 lead.

Centennial’s momentum continued in the early moments of the second half as Calvin Smith converted two baskets to up the Colts’ lead to 16.

However, much to the chagrin of the home crowd, the Colts’ lead slowly disappeared because Humber’s offence finally got on track and reeled off seven straight points to come within two points, 62-60.

But the Colts survived Humber’s late game flurry and tied the series at one game with Centennial’s Donovan Thomas leading the points parade with 19.

“It was a tremendous turn-around,” said Selkirk. “From my point of view, it proved to me that our kids can beat them (Humber). And up ‘til now, I wasn’t sure.”

Inspired by the home crowd in the first game, Humber took control and led at halftime 37-30. Most of the Colts’ points resulted from low-percentage outside shots while Humber was able to work inside of the Colts’ defence.

In the second half, Humber’s offence continued to thrive as they coasted to a 72-64 victory. 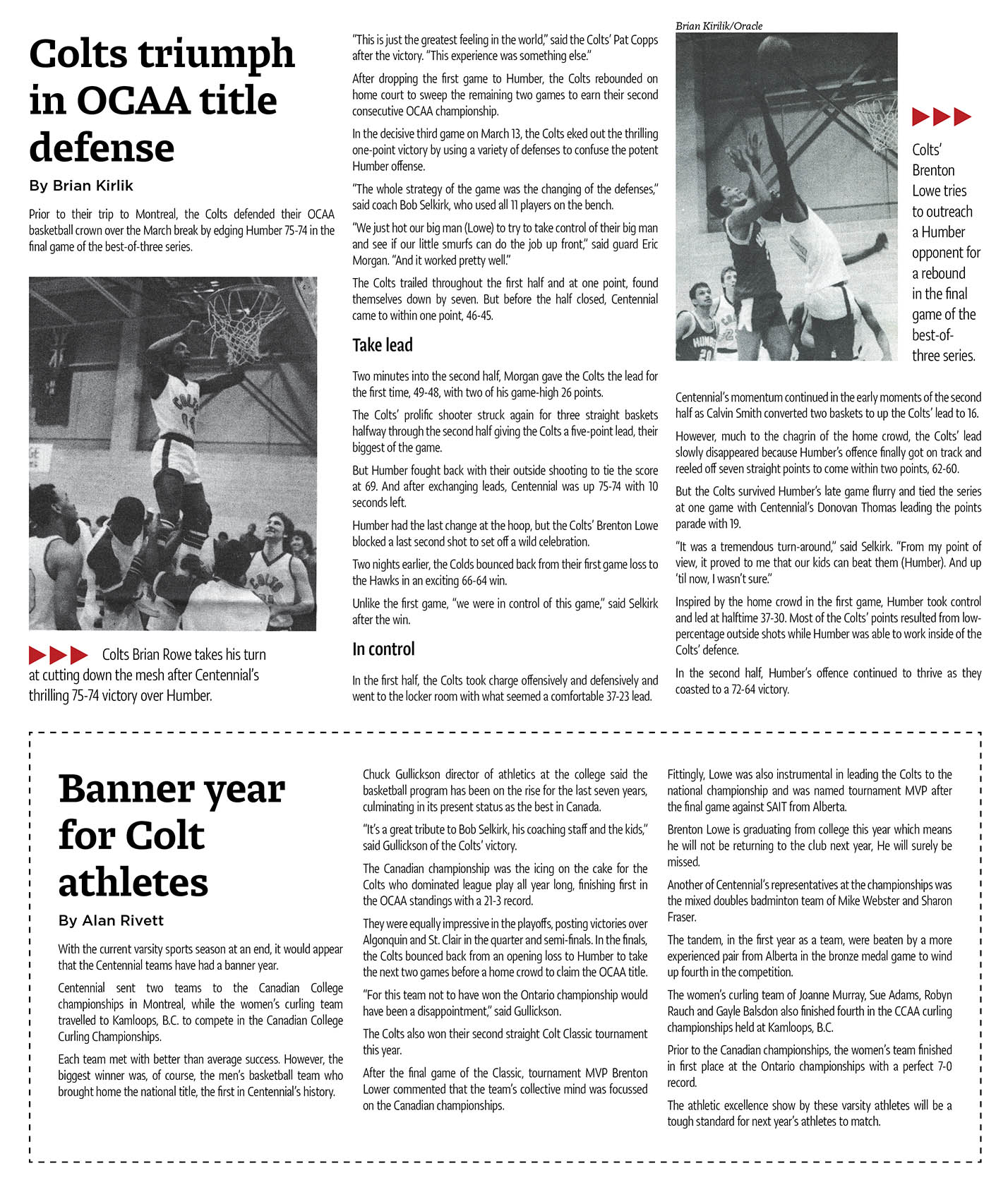 Colts Brian Rowe takes his turn at cutting down the mesh after Centennial’s thrilling 75-74 victory over Humber.

Colts’ Brenton Lowe tries to outreach a Humber opponent for a rebound in the final game of the best-of-three series.

With the current varsity sports season at an end, it would appear that the Centennial teams have had a banner year.

Each team met with better than average success. However, the biggest winner was, of course, the men’s basketball team who brought home the national title, the first in Centennial’s history.

Chuck Gullickson director of athletics at the college said the basketball program has been on the rise for the last seven years, culminating in its present status as the best in Canada.

“It’s a great tribute to Bob Selkirk, his coaching staff and the kids,” said Gullickson of the Colts’ victory.

The Canadian championship was the icing on the cake for the Colts who dominated league play all year long, finishing first in the OCAA standings with a 21-3 record.

They were equally impressive in the playoffs, posting victories over Algonquin and St. Clair in the quarter and semi-finals. In the finals, the Colts bounced back from an opening loss to Humber to take the next two games before a home crowd to claim the OCAA title.

“For this team not to have won the Ontario championship would have been a disappointment,” said Gullickson.

After the final game of the Classic, tournament MVP Brenton Lower commented that the team’s collective mind was focussed on the Canadian championships.

Fittingly, Lowe was also instrumental in leading the Colts to the national championship and was named tournament MVP after the final game against SAIT from Alberta.

Brenton Lowe is graduating from college this year which means he will not be returning to the club next year, He will surely be missed.

Another of Centennial’s representatives at the championships was the mixed doubles badminton team of Mike Webster and Sharon Fraser.

The tandem, in the first year as a team, were beaten by a more experienced pair from Alberta in the bronze medal game to wind up fourth in the competition.

Prior to the Canadian championships, the women’s team finished in first place at the Ontario championships with a perfect 7-0 record.

The athletic excellence show by these varsity athletes will be a tough standard for next year’s athletes to match.